One of the more obvious differences one would see upon visiting both types of churches, is the centrality of  Communion within the Roman Catholic Mass.  Baptists rarely take communion, and generally only take it on special occasions, such as for Christmas or Easter.  At some churches it is taken every few months, or quarterly.  However, in the Catholic church, Communion is usually offered at every mass.

Another difference is the level of decoration in the main sanctuary.  Roman Catholic Churches are usually quite ornate, often replete with paintings, icons, and/or statues of saints on or near the walls.  Baptist churches, (in contrast), usually have few if any paintings, and are usually decorated in a simple fashion.

A third difference is that Roman Catholic Church services are usually shorter than Baptist services.  Baptist services are usually 1 to 1-1/2 hours in length.  It is not at all uncommon, however, to find a Roman Catholic Mass lasting less than 1/2 hour in length.   This is especially true in or around the Vatican in Rome, where masses are often held for the many tourists, and may last only a few minutes each.  (This was according to a so-called Baptist who was a tourist at The Vatican several years ago, and who even arranged to have a " personal audience with The Pope".)  The Vatican is the international headquarters or " center' of the Roman Catholic Church.  Baptists, (in comparison), have no " center" per se.

The term " Baptist" refers to one who believes in the adult, (or non-infant), " baptism of believers" in Jesus.  In other words, Baptists are those who claim a personal faith in Christ alone for salvation and who also reject the baptism of infants.  Baptists also believe that Baptism is for those who are already saved, not for those who hope to get saved.

The term " Catholic" means " Universal".  It generally refers to the Roman Catholic Church, which for most of the last two thousand years has been the largest and most organized religious group within Christendom.

During the later part of the Middle Ages, some people who were seriously studying the Bible became convinced that infant baptism, (i.e. the sprinkling or immersion of babies), was an unscriptural act.  As a result, these people then " re-baptized" each other as adults.  The word " Ana-Baptist" (" Anabaptist" ) means " re-baptizer".  They were called " re" -baptizers, because most, if not all of them had already been " sprinkled" as infants.  There were millions of such Baptists during the period of time between the end of the Middle Ages and the early Reformation Period.

The Anabaptists (Baptists) based their insistence on the re-baptism of non-infants, (who believed in Jesus Christ alone for salvation), on three primary arguments:

(1) In the Bible, only those old enough to understand were baptized.  (No infants were baptized in the New Testament.)

(2) The word for " baptize" in the original Greek means " to immerse".

(3) The Bible says that those who believe may be baptized.  Since infants cannot understand and therefore cannot believe, (in the active sense), on Christ, baptism must only be for older children and adults.

At the time, infant baptism was widely practiced throughout Europe.  In some places, it was almost considered to be a mark of citizenship, (almost like a birth certificate).  Therefore, those who rejected infant baptism were often accused of being disloyal to the civil governments of the time.

The Reformation brought three main groups of Protestants into existence.  These were the " Calvinists", founded by John Calvin in Northern Europe, the " Anglicans" , (or " Church of England" ), and the " Lutherans" (founded by Martin Luther in Germany).  These three, together with other smaller groups, comprised the Protestants.  The Protestants for the most part continued the Roman Catholic practice of infant baptism.  Because Baptists rejected such infant baptism, Baptists were never really considered to be Protestants in that sense.  In fact, Baptists were often persecuted by both Protestants and Roman Catholics alike.

The Roman Catholic Church emphasizes the " Mass" , (an act viewed by Catholics as re-sacrificing the actual body and blood of Christ through Communion.)  Baptists consider the Mass to be blasphemous, because we believe that Christ is up in Heaven, that he died only once, and that this one death of Christ on the cross was sufficient to pay for all sins.

Catholics believe in a " Universal" (" Catholic" ) Church, which they say was set in place by the Apostle Peter, the first " Pope" , the keeper of the keys to the Gates of Heaven and Hell.  Baptists believe in the autonomy and authority of the Local church as being completely independent from all other human authority.

Catholics believe in prayer to Mary and the Saints.  Baptists believe that prayer should only be made to God through Christ.

Catholics believe in the mediation of Roman Catholic priests.  Baptists believe that there is only " one mediator between God and men, the man Christ Jesus;" (I Tim. 2:5)

Catholics believe in the practice of worshipping icons in the Church.  Baptists believe that all such religious icons are idolatrous, and therefore reject their use, either as decorations or as idols.  This is one reason that Baptist churches tend to be more plain in appearance. 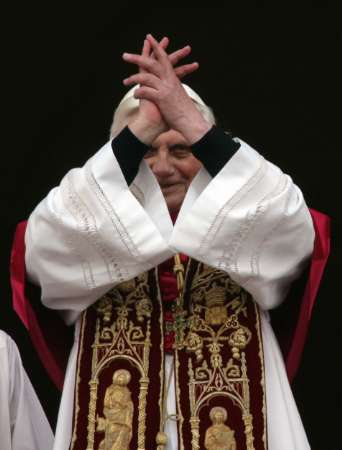 There are many other differences between Catholics and Baptists.  Nevertheless, despite these other differences, many Bapticatholics and New Evangelicals, such as Billy Graham, Rick Warren, and the late Jerry Falwell have encouraged cooperation between Catholics and Baptists.  Baptists have always taught the doctrine of " Biblical Separation" from the Roman Catholic Church.  Therefore, such Bapticatholics and New Evangelicals have departed from this historical Baptist doctrine, and are now teaching a new doctrine of ecumenicism under with The Ecumenical Movement.

One day, most Baptists and Catholics will be united together under the Antichrist.  This is described in the Book of Revelation, which describes future events such as the emergence of the  Great Whore; the Antichrist and the Two Witnesses.  The Great Apostasy (or, " falling away" ) from historical religious roots is also the direction that the Ecumenical Movement is taking most Baptists and Catholics today.